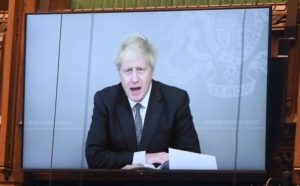 I’m constantly reminded of how different people read things differently; Boris Johnson recently answered a question at PMQ’s that “mortgage companies should realise that they (EWS1 forms) are not necessary for buildings under 18 metres….”

The problem is that the government guidance and the RICS say that all buildings of any height may need to be risk assessed. May, not must, but that word brings in buildings under 18m that could well have problems.

I’m sure that it’s not the first time that a politician says something that doesn’t quite tally with their own guidance, because the whole issue is complicated, and he may not have been briefed so well to understand why EWS1 are being sought on buildings under 18m, but it’s certainly not helpful is it?

We’re struggling to explain this entire mess to people who have invested a lot of money and emotion into their homes, to find themselves potentially liable for thousands because the external fabric on their building isn’t up to scratch. Rightly, they’re angry, they feel let down, and we agree – this should never have happened. They’re right to expect that buildings (their homes!) should have been delivered in a way that will keep them safe, and yes, they have been let down.

I was pointed to Johnson’s answer by one leaseholder we’re in contact with is holding on to the hope that the law will change so that buildings under 18m would be precluded from needing to be inspected nor indeed, remediated. I think that this misses the point; if the building has a defect that means that fire can spread when it shouldn’t, then it needs to be remediated. Simple as that. There of course remains the argument to be had about who pays and so on, but it seems bizarre to consider that a building with a defect shouldn’t be remediated because it’s not tall enough.

But back to the point about language. I read Johnson’s answer, and based on what I’m having to deal with, I immediately thought “that’s wrong”. But when I re-read it and consider his use of the word “necessary”, it means that his answer is actually correct. It’s not necessary, but the guidance with the word may means that a lot of buildings under 18m are caught in this, and with that, the very human cost of people stuck in properties that no longer suit them and facing large remediation bills for something which isn’t their fault.